Grand piano
SKU
01.02.0156
1 to 2 weeks
This item will be available within 1 to 2 weeks. Once available in the warehouse, the piano will be delivered immediately.

Compare
As low as €27,819.00
Trustpilot
Click here to see more reviews
Skip to the end of the images gallery 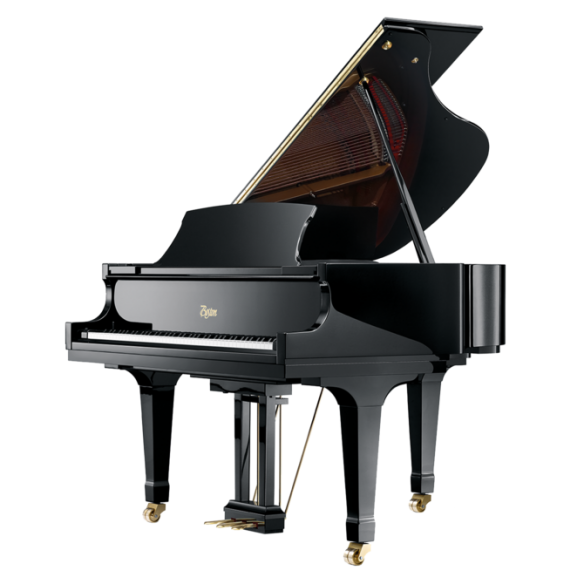 The smallest Boston grand piano offers the most enjoyable playing experience, thanks not least to the wide-tail design, which allows a full, voluminous sound.

All Boston grand pianos have duplex scaling – one of the most famous inventions by Steinway & Sons, which provides a full, balanced and especially long-lasting tone. The duplex systems installed in the cast iron plate provide a rich array of overtones and harmonic diversity.

In order to meet the highest quality standards, only the finest Sitka spruce is used to build the Boston’s soundboard – wood with a straight grain and a defined minimum number of annual rings per centimeter. Based on the design of Steinway & Sons in 1936, the Boston soundboard is not uniformly thick, but tapers toward the ends. This allows it to vibrate more freely and generate a fuller sound.

A range of Steinway patents and designs were incorporated into the construction of Boston at the outset. In 2009, the introduction of the revised Boston Performance Edition heralded a number of extraordinary innovations, two of which are of particular importance. The rim of the Boston clearly bears the genetic fingerprint of Steinway & Sons. While the outer rim consists of several layers of mahogany, only maple is used for the inner rim. As a result, the housing is not only more stable, but it also offers a much more pleasant sound – the fundamental goal of the Steinway system. In efforts to optimize the new generation of Boston grand pianos, engineers came up with the patented Octagrip pinboard, whose design is based on the Hexagrip pinboard principle conceived by Steinway & Sons. This feature can only be found on Boston pianos.

Fine woods provide the Boston pianos with a beautiful shell: walnut and mahogany will impress those who want an alternative to traditional black or white – after all, Boston pianos should provide their owners with joy for the eyes as well as the ears.