Self-playing piano
SKU
01.06.9923
On request
This item currently has a slightly longer delivery time. Contact us for more information.

Compare
As low as €61,479.00
Trustpilot
Click here to see more reviews
Skip to the end of the images gallery 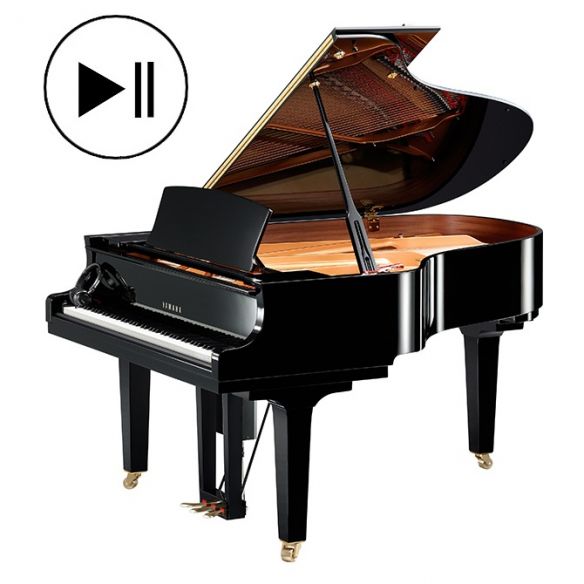 The Yamaha C3X ENSPIRE PRO is an acoustic grand piano, equiped with a piano player system; namely the the Disklavier Enspire system by Yamaha.

Here are the 10 key features that make Disklavier ENSPIRE the most powerful and inspiring Disklavier ever.

Besides that the instrument can be played as an acoustic grand piano.

The C3X grand piano is perfectly suited for the living room as far as size is concerned. But it can also be used in smaller concert halls and productions. This piano really starts to sing when it is played.

One of the most important factors for realising a rich tone is the support within the instrument. When we play fortissimo or pianissimo, the force we transfer will make the instrument bend slightly. This causes a certain loss of energy and sound. The lower frame is the part of the piano destined to absorb this. Here we can make a link to the human skeleton. For example, the C3X has a lower frame that is 20% thicker than with other pianos. As such it gives visibly more support and also reflects one of the considerations made during the renewal of this well-known series.

A violin is built around a beautifully streamlined body with 3-dimensional curvatures and uses a delicate shape. This can be compared to the 3-dimensional concave design of a soundboard in a piano. We refer to this as 'the crown'. By building pianos for years and by acquiring expertise Yamaha has gathered the necessary experience and know-how to ensure that the soundboard always produces a superior sound projection.

Expertise when making the cast-iron frame manifests itself in robust quality.

The cast-iron frame of a grand piano should be able to absorb several tons of tension. The frame actually works with the wooden construction in order to support the snare tension, but it also has a profound impact on the sound. Yamaha makes these frames themselves using a process known as the 'vacuum process'. This method is used for building the best frames in the world.

The comforting feeling whilst playing on a Yamaha grand piano.

The CX-series is equipped with a keyboard cover that is controlled through a soft landing system. So you don’t have to worry anymore about the keyboard cover unexpectedly or accidentally falling down. The beautiful Yamaha CX-series grand pianos have obtained excellent references from many connoisseurs. The new line consisting of seven instruments might please almost everyone.