Digital upright piano
SKU
11.06.0775
On request
This item currently has a slightly longer delivery time. Contact us for more information. 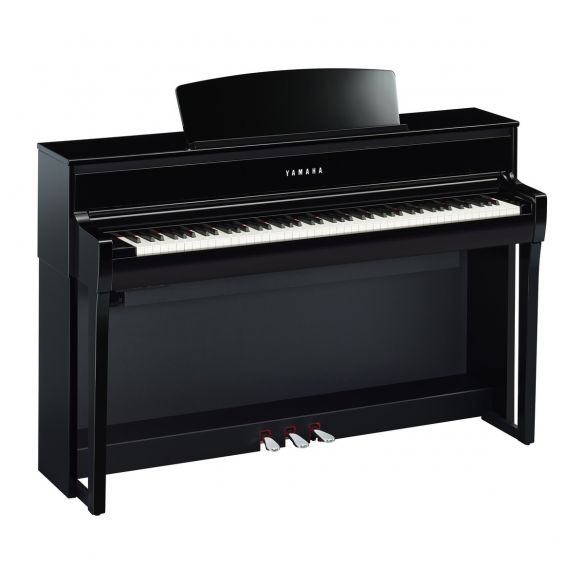 The Yamaha Clavinova CLP-775 is equipped with the GrandTouch keyboard. The touch was inspired by Yamaha's CFX concert grand piano, giving you a superior playing feel.

Thanks to the CFX samples, the power and placement of the speakers and the built-in speaker box, the balance between touch and sound is perfect. Moreover, the instrument is very user-friendly thanks to the touchscreen. Wireless connection via Bluetooth Audio and Midi allows you to easily play your favorite song via YouTube or control your piano with the SmartPianist app.  All this makes the Yamaha Clavinova CLP-775 a very high-performance instrument.

GrandTouch keyboard features wooden keys that showcase Yamaha’s expertise with wood for pianos. Just as with grand piano keyboards, the solid wood is cut from the very best parts of well-dried lumber, making the keys more resistant to warping than keyboards made of laminated wood. The wooden texture and structure of the keys create a more grand piano-like feel.

When playing a digital piano, the back area of the keys may prove to be a challenge to full musical expression. This is because the back of the key is closest to the fulcrum of the action. The closer to this pivot point that you strike the key, the less leverage you have and the more strength you need to apply. The greater length of GrandTouch keys give the player MORE leverage, allowing for better expressive control, even at the backs of the keys. This is the same support length found on the Yamaha S3X premium grand piano (as of July 2020), and is the longest support length used on any digital piano.

Every single key on a grand piano keyboard is weighted differently. This is because the strings for each note are slightly thinner and shorter in the treble register, becoming thicker and longer towards the bass register. The 88-key Linear Graded Hammers of the Clavinova is the first-of-its-kind to faithfully duplicate this graded touch with differing weights and key return on each one of its keys. This results in a feel and response that is astonishingly like that of a grand piano, and allows players to gain an appreciation of a more authentic touch.

Using the damper pedal subtly alters the nature of a piano’s sound and is essential to providing the pianist with all the necessary expressive tools to convey their musical vision.

The GP Response Damper Pedal offers a grand piano-style resistance curve, starting out light to the touch and growing heavier as the pedal is depressed further. This allows players to become accustomed to the nuances of delicate pedaling.

The touch panel only displays text when it is on—when the panel is off, it has the smooth finish of a keyblock.

When a pianist plays a grand piano, they cause the entire body of the instrument to reverberate, and become enveloped in the colorful tones created from the combination of various acoustic elements in the air around them. The pianist becomes immersed in the diffusing sound and reverberation. The CLP-785/775 deliver this pleasant feeling through Grand Acoustic Imaging. The latest acoustic design and measuring technology create the same sound image and sound field of a grand piano despite the compact size of the digital piano. We optimally balanced and placed the bass, mid, and treble speakers to achieve the sound radiation and centroid characteristic of grand pianos so that each and every tone played through the speakers sounds like it was emitted from the proper place on an actual grand piano. The speaker placement and balancing replicates the sensation of the hammers striking the strings in front of the pianist, and the reverberations from the strings dissipating away from them. We also used a transducer to achieve the full reverberation of sounds emitted by the entire grand piano soundboard, replicating the sense of depth experienced when playing an acoustic grand piano.