Digital upright piano
SKU
11.06.0805
2 to 3 weeks
This item will be available within 2 to 3 weeks. Once available in the warehouse, the piano will be delivered immediately. 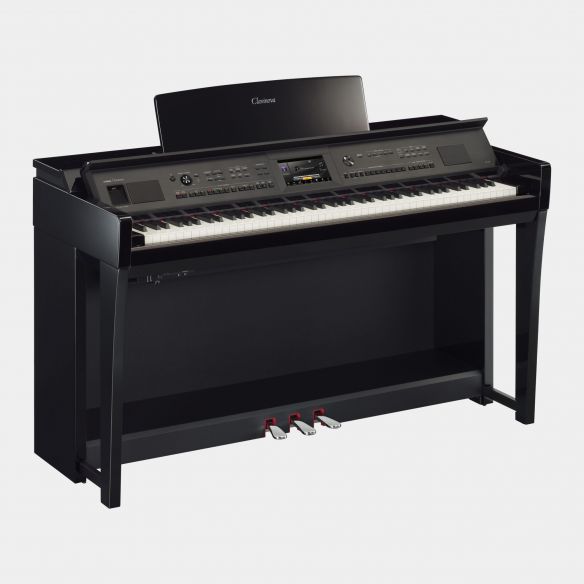 Do you want to enjoy a variety of musical genres? Do you wish to make music, compose and sing along with family and friends? Then the Yamaha Clavinova CVP-800 series is the perfect match for you!

The Yamaha Clavinova CVP-805 has a choice of more than 1.000 voices which can be combined with more than 500 different accompaniment styles. This model also offers interactive sheet music. You can even organize karaoke sessions with it. The Yamaha Clavinova CVP-805 features the famous GrandTouch keyboard with wooden keys and a rich sound (4 speakers). Even classical pianists can fully enjoy this model!

Are you looking for even more voices and a top notch sound experience? Take a look at the Yamaha Clavinova CVP-809 or the CVP-809GP digital grand piano.

Yamaha Clavinova CVP Series pianos provide plenty of non-piano Voices as well as band and orchestra accompaniment in a wide array of genres, including jazz and pops… Play your favorite tunes as they are written, or try your hand at arranging—the next catchy arrangement is just waiting to be discovered.

Sing, compose and explore the limitless possibilities of the CVP Series

The Yamaha CFX, our flagship 9’ concert grand piano, offers sparkling highs and a powerful resonant bass with a sound that projects to the furthest reaches of any concert hall. The Bösendorfer Imperial is a piano known throughout its long history for its classic Viennese sound. Both are outstanding pianos characterized by distinctive traits of power, versatility, subtlety and lightness. Both are found only in a Clavinova digital piano.

In a grand piano, sound resonates throughout the body of the instrument, producing a rich reverberation that envelops the listener in sound. This phenomena is reproduced perfectly in the Yamaha Clavinova through enhanced Virtual Resonance Modeling (VRM). It calculates the various states of the strings for each of the 88 notes on the keyboard, from one instant to the next, and timing and depth of damper pedals pressed. This technology allows for vivid, bright, richly-varied expression that reflects the limitless number of factors inherent in piano performance.

Sound in an acoustic piano attenuates over a long time. Pianists can change the volume of the sound—as well as its dynamics—to achieve both mellow and bright tones by simply changing the pressure they apply to the keys.

The Yamaha Clavinova features long, carefully-sampled recordings of notes on a piano, reproduces them in rich detail and utilizes unique Yamaha technologies to achieve smooth tonal transitions in response to the touch of the player.

Additionally, the Yamaha Clavinova has been repeatedly tested and adjusted by numerous pianists in order to attain a performance feel similar to that of a grand piano.

The moment a pianist’s fingers are lifted from the keys of a grand piano, subtle changes occur in the instrument’s tone as the damper is lowered onto the strings to mute its sound. Key-Off samples features actual recordings of these changes, offering a faithful reproduction of the most subtle changes in the piano’s sound, allowing for a more realistic performance.

Yamaha’s advanced binaural sampling technology uses samples from the CFX, Yamaha’s acclaimed concert grand piano, recorded with specialized microphones that capture locational information and other nuances discerned by the human ear. The resulting sound is so natural, so enveloping, that you’ll soon forget you’re even wearing headphones at all.

Once you choose the Yamaha CFX Grand Voice and put headphones on, the binaural sampled sound is automatically ready and no additional settings are required. Now with or without headphones, you can fully enjoy the concert grand experience at home.

Built on a Legacy of Concert Grand Piano Craftsmanship

Grand Piano keyboards are characterized by a light feel when played gently, and a heavier feel when played with more strength. Conversely, a non-grand piano keyboard has a uniform resistance regardless of whether the player uses a gentle or heavy touch. This has traditionally been one of the most significant differences between the touch of a grand piano and that of a digital piano. However, when developing GrandTouch keyboard action, Yamaha sought to reproduce the true key resistance that is unique to the grand piano, with greater fidelity. The result is an instrument with a more responsive touch, offering a greater dynamic range than ever before. Now you can experience a much more controlled, nuanced sound when playing softly, or powerful, brighter tones when playing with a stronger touch — just like that of a grand piano.

Pianists prefer grand pianos not only because of the way they sound, but also because of the way the keys respond to their touch. When grand piano keys are struck, there is a certain weight or resistance to the touch. Similarly, when keys are released, they return to a resting position based on the balance between the key and the internal mechanics of the keyboard. It is difficult to reproduce the natural return of the keys of a grand piano in a digital piano, due to differences in the mechanics. Yamaha carefully studied these characteristics when developing the GrandTouch keyboard, and has now reproduced this fine balance in the Clavinova digital piano. The result is GrandTouch - detailed grand piano feel that allows for uniform tone control, precise rhythm and smooth melodic expression - fundamental to an exceptional musical performance.

When playing a digital piano, the back area of the keys may prove to be a challenge to full musical expression. This is because the back of the key is closest to the fulcrum of the action. The closer to this pivot point that you strike the key, the less leverage you have and the more strength you need to apply. The greater length of GrandTouch keys give the player MORE leverage, allowing for better expressive control, even at the backs of the keys. This is the same support length found on the Yamaha S3X premium grand piano (as of April 2017), and is the longest support length used on any digital piano.

We Didn’t Let Any Detail Slide

Our fingers are more sensitive than we think, and for pianists, the texture of the piano keys is extremely important. The GrandTouch keyboard features white keys made from the highest quality synthetic ivory, developed independently by Yamaha. The black keys are finished in synthetic ebony. Synthetic ivory keytops reproduce the tactile surface of the real ivory keyboards once used in older acoustic pianos. It features highly absorbent material that prevents fingers from slipping even after hours of practice, while retaining the ideal texture and feel. Resulting from well over a century of experience in making acoustic pianos, this exclusive Yamaha technology achieves a finish that feels natural and comfortable. In addition to the feel, the appearance and fine texture of these keys is unmatched by any other digital piano, and is sure to inspire pianists from the moment they experience it.

The escapement mechanism in a grand piano moves the hammers away from the strings quickly after they strike them, in order to prevent any interference with string vibration. This mechanism produces a slight clicking sensation when the keys are pressed gently. Since Real Grand Expression offers players superb sound, touch and pedaling, we decided to create an escapement that delivers outstanding playability, repetition, and response without impeding performance. The Clavinova keyboards feature an escapement mechanism that reproduces this sensation near the bottom of the key dip. They have been designed in such a way that the click is discernible only on the lightest keystrokes, similar to the keyboard of a grand piano. These keyboards have been adjusted to provide additional friction that balances key repetition and response without impeding performance.

Every single key on a grand piano keyboard is weighted differently. This is because the strings for each note are slightly thinner and shorter in the treble register, becoming thicker and longer towards the bass register. The 88-key Linear Graded Hammers of the Yamaha Clavinova is the first-of-its-kind to faithfully duplicate this graded touch with differing weights and key return on each one of its keys. This results in a feel and response that is astonishingly like that of a grand piano, and allows players to gain an appreciation of a more authentic touch.

You can play music through the audio system on the Yamaha Clavinova by using a Bluetooth-enabled smart device. Enjoy playing along with any songs on your smart device as you stream audio such as mp3 files.

Have you ever tried to figure out what the chords are to your favorite songs? Smart Pianist app for iPhone/iPod touch/iPad helps you practice and perform songs by analyzing the audio song stored in your iOS device and then displays the chord symbols for you.

Smart Pianist can analyze songs on your smart devices to create chord progressions for you to follow. On the Yamaha Clavinova CVP-800 Series, Smart Pianist features an “Audio To Score” function that creates piano accompaniment scores automatically.

Smart Pianist can play back both preset and commercially available songs, and allows you to simply listen to them or play along. It also displays notation for hundreds of built-in MIDI songs, and you can even enjoy additional songs for purchase from Yamaha MusicSoft.