Bundles
SKU
19.05.0920
In stock
Ordered before 6 p.m., shipped tomorrow
This item is in stock with us and can therefore be delivered quickly. Acoustic pianos are always tuned and polished before delivery. Digital pianos and accessories are shipped the next working day. Delivery usually takes place within 2-3 business days.

Compare
As low as €1,669.00
Trustpilot
Click here to see more reviews
Skip to the end of the images gallery 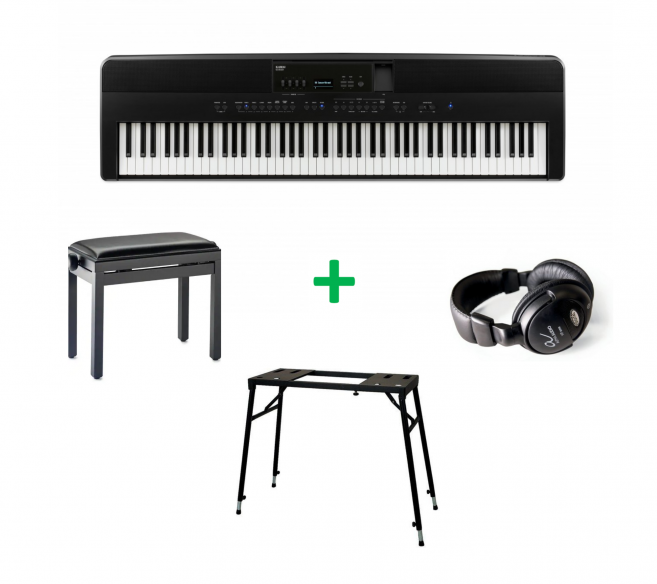 Included in the BUNDLE:

The ES-920 features the Responsive Hammer III keyboard, with 88 graduated weighted keys. The keyboard features an escapement (let-off) mechanism, like a real acoustic piano. Thanks to the precise 3-sensor technology, pianists can expect a very natural playing feel. In addition, this model features Ivory Touch key surfaces, which support piano playing and absorb perspiration from the fingers.

The ES-920 contains beautiful samples of the world-famous Shigeru Kawai SK-EX concert grand piano, which is played in many concert halls around the world and is often selected by professional pianists. Using Kawai's Harmonic Imaging XL sound technology, the sounds of all 88 keys are reproduced in a highly detailed and pure manner. By recording each key individually in this way, the character of the acoustic grand piano is particularly well preserved. With the expanded sample memory, the Harmonic Imaging XL technology increases the sustain of the individual notes by 120%.

In addition to the realistic sounds of acoustic pianos, the ES-920 has an extensive selection of sounds (38 in total), such as E-piano, Hammond or church organ, strings, choir, etc., that enable the musician to play in a wide variety of genres. In addition, in the Rhythm section you also have a total of 100 accompanying styles (in different genres e.g. pop, rock, jazz, funk, Latin,...), which make the playing experience even more lively.

The ES-920 offers numerous possibilities to customize the sound via flexible controls for Reverb, Effects and Amp Simulator. For live musicians, the addition of 4-band EQ faders on the top panel is particularly useful. These allow you to quickly adjust the sound to the environment or quickly boost frequencies.

The ES-920 features integrated Bluetooth MIDI and audio technologies that allow the instrument to communicate wirelessly with supported smart devices. Thus, by pairing the instrument with a smartphone, tablet or laptop, you can use a wide range of interactive apps or stream audio from e.g. YouTube or Spotify. You can also connect to Kawai's PianoRemote app, which allows you to adjust settings or sounds of the instrument via a user-friendly interface. The ES-920 is also compatible with the PiaBookPlayer app, allowing you to view and listen to scores of many classical performances through the instrument's speakers.

The ES-920 can optionally be combined as a full-fledged digital piano with the HM-5 stand and the F-302 triple pedal.