Digital upright piano
SKU
11.05.0079
On request
This item currently has a slightly longer delivery time. Contact us for more information. 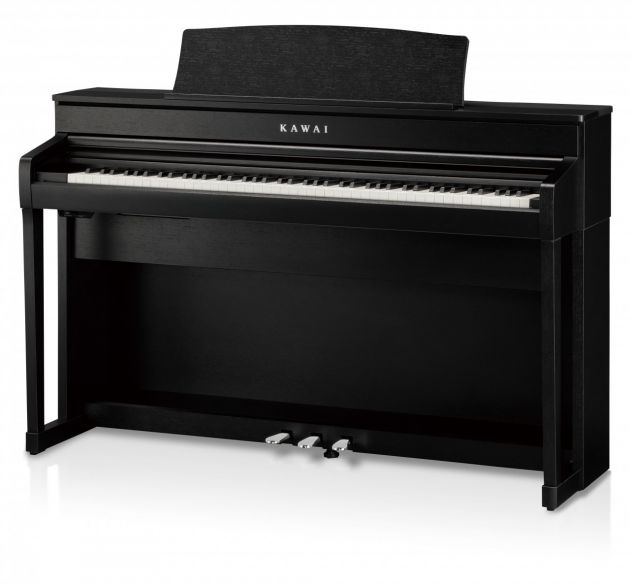 If you are looking for a digital piano that comes very close to the authentic playing feel and rich sound of a real grand piano, then the Kawai CA-79 is a great choice at a competitive price! Part of the highly popular and award-winning Concert Artist series, the Kawai CA-79 features the very best Grand Feel III keyboard, with long wooden keys providing extra subtlety and unprecedented control over the sound. The piano sound was sampled from the high-end Shigeru Kawai concert grand piano. The CA-79 is fully up to date with the latest technological developments through operation via an LCD touchscreen and Bluetooth connectivity.

The CA-79 features the new Grand Feel III keyboard with wooden keys, providing a playing feel very similar to that of a real grand piano. The keys are longer, so the tilt point is further back, like on a grand piano. This gives you more control and a better response at the touch. All 88 keys have mallets with graduated weight, counterweights and escapement (let-off) mechanism. In addition, the 3-sensor technology ensures optimal repetition and game control. The Ivory/Ebony Touch key pad is moisture absorbent, making it harder for your fingers to slip off and will lower the error rate.

The CA-79 is equipped with the Grand Feel pedal system. With this system developed by Kawai, the resistance when using the three pedals (sustain, soft and sostenuto) corresponds to the playing feel of the pedals of a real grand piano. Moreover, the correct placement of the pedals was also taken into account.

The CA-79 contains beautiful samples of the world famous Shigeru Kawai SK-EX concert grand piano, which is played in many concert halls around the world and is often selected by professional pianists.

In Pianist Mode, the sound was made even more realistic thanks to the SK-EX Rendering technology. You can choose from 10 different piano characters, ranging from classical and romantic, to jazz. The sound of the Shigeru Kawai concert grand piano was recorded at multiple points (multi-channel), resulting in even more authentic and lively dynamics. Through resonance modeling, the sound reproduction is further enriched by adding complex interactions of strings, dampers and other parts of an acoustic piano.

Using Kawai's Harmonic Imaging XL sound technology, the sounds of all 88 keys are reproduced in a highly detailed and pure manner. By recording each key individually in this way, the character of the acoustic grand piano is particularly well preserved. Due to the expanded sample memory, with the Harmonic Imaging XL technology the sustain of the individual notes is extended by 120%.

Using ONKYO Premium Audio Technology, the sound system of the CA-79 is even clearer and more powerful than its predecessor. Signal paths without distortion with maximum dynamics offer high resolution and pure sound. The CA-79's speaker system delivers a total amplification of 100W spread over 6 speakers and features sound diffusers that further simulate the 360-degree sound of an acoustic piano. The low frequencies are reproduced through the lower speakers and the mid and higher frequencies through the front speakers. The result is a full, and rich sound that is very similar to the sound of a grand piano.

Thanks to Spatial Headphone Sound (SHS) technology, the sound reproduction through headphones is more realistic and spacious.

All functions are accessible via the CA-79's 5" touchscreen display, which allows sounds and settings to be selected via an attractive user interface. The display can also be set to automatically go dark while playing, preserving the instrument's acoustic piano appearance and minimizing visual distractions for the pianist.

The CA-79 features integrated Bluetooth MIDI and audio technologies that allow the instrument to communicate wirelessly with supported smart devices. So by pairing the instrument with a smartphone, tablet or laptop, you can use a wide range of interactive apps or stream audio from e.g. YouTube or Spotify. You can also connect to Kawai's PianoRemote app, which allows you to adjust settings or sounds of the instrument via a user-friendly interface. The CA-79 is also compatible with the PiaBookPlayer app, allowing you to view and listen to scores of many classical performances through the instrument's speakers.