Grand piano
SKU
01.11.0228
In stock
Delivery within 8-10 days
This item is in stock with us and can therefore be delivered quickly. Acoustic pianos are always tuned and polished before delivery. Digital pianos and accessories are shipped the next working day. Delivery usually takes place within 2-3 business days. 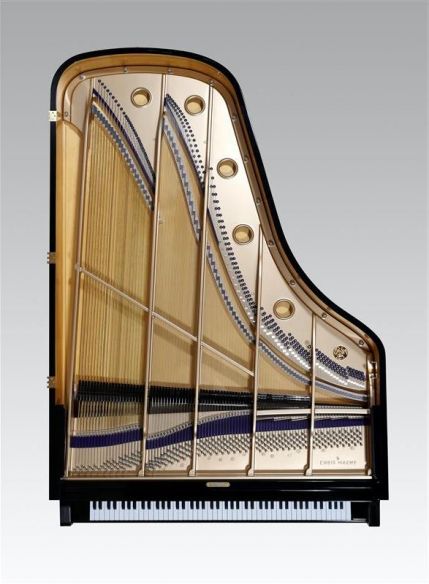 Perfectly suited for smaller concert halls or private living rooms, the Parlor Grand CM//228 is the shorter version of the Chris Maene Concert Grand CM//284. It brings the characteristic straight-strung sound, its transparency and brilliance, in a more intimately sized grand piano-model.

In the late 19th century, Steinway & Sons successfully brought to fruition the concept of the modern cross-strung grand piano. Ever since then, this construction concept has been imitated by all piano builders. It has resulted in a standardization of piano building and a uniformity of piano sound. As a reaction to this, the second half of the 20th century witnessed an intense quest for performance practices using historical instruments that bring back the greater sound diversity and transparency of older times.

As part of this movement, Chris Maene Factory soon began specializing in building harpsichords and pianofortes, based on Chris Maene’s renowned and unique collection of more than 300 historical instruments. This gradually led to the desire to build his own grand piano with different sonorous properties, aiming to offer a valid artistic alternative to existing concert grands. To accomplish this, Chris Maene went back to the original basic principle of straight, parallel stringing, where the bass strings are not crossed over the other strings but run parallel to them.

In 2013 Daniel Barenboim commissioned Chris Maene to build “the perfect parallel-strung concert piano”. He wanted to reconcile the unique characteristic sonorous richness of the historical piano with the volume, clarity, power and playing comfort of the best modern concert pianos.

Chris Maene had already been thinking of this new concept for a while, and with this project he could finally make his ultimate dream come true: building a concert piano that would bring together tradition and innovation.

In May 2015 Daniel Barenboim inaugurated his new straight strung grand piano with Schubert recitals in Vienna, Paris and London. The sound of the unique instrument was very well received by press, audiences and musicians alike. By now the Chris Maene Straight Strung Grand Piano is played all over the world by the best international concert pianists, and the Chris Maene Factory is building a full range of straight-strung grand pianos.