Bundles
SKU
19.06.1145
In stock
Delivery within 2-3 days
This item is in stock with us and can therefore be delivered quickly. Acoustic pianos are always tuned and polished before delivery. Digital pianos are shipped the next working day. 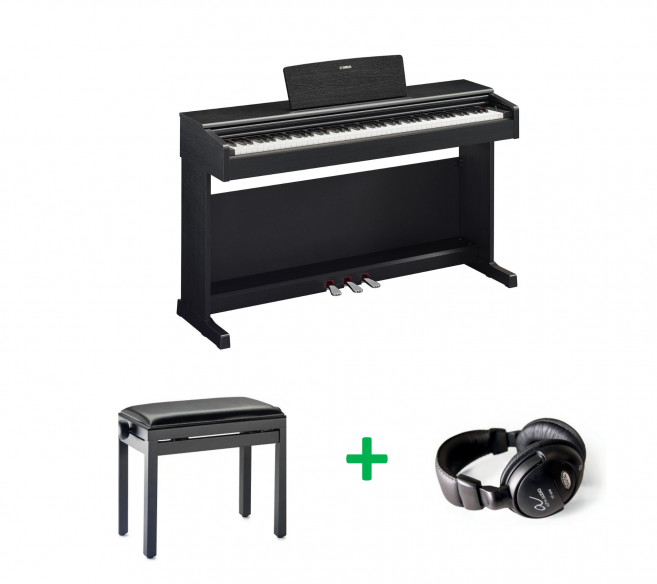 Included in the BUNDLE

The Yamaha Arius YDP-145 features a weighted, synthetic keyboard with 88 keys (Graded Hammer Standard). In this way, the response and playing feel of a grand piano is imitated as naturally as possible. In addition, the sustain pedal is equipped with a half-damper function, which makes the piano experience even more expressive.

The Yamaha Arius YDP-145 is equipped with the updated Virtual Resonance Modeling Lite (VRM Lite) technology. This recreates the sound of a grand piano very realistically by simulating the complex interaction of string and vocal resonance.

The YDP-145 uses a newly developed tone escapement construction on the back of the cabinet that emits sound from the inside of the piano. As a result, you experience the natural sound radiation and three-dimensional resonance like that of an acoustic piano.

The YDP-145 is compatible with Yamaha's free Smart Pianist app. Simply download the app to your smartphone or tablet and connect it to the instrument. With this app, you can easily control the different instrumental sounds and can call up scores of the built-in songs. The app also features an extensive Piano Room function for changing the sound quality and resonance of the piano sound.

The YDP-145 uses new technology that optimally corrects the sound balance based on the volume you set, giving you an exceptionally natural sound that is pleasant to listen to and kind to the ears, even if you play for a long time. Thanks to the Stereophonic Optimizer effect, you can enjoy the natural room sound experienced when sitting behind an acoustic grand piano, even when using headphones.

Although mainly based on straight lines, the YDP-145 has a stylish design with elegant curves typical of a grand piano. Moreover, you can choose from different color variants that best suit your interior and personal taste.