Silent acoustic piano
SKU
01.05.4450
In stock
Delivery within 5-10 days
This item is in stock with us and can therefore be delivered quickly. Acoustic pianos are always tuned and polished before delivery. Digital pianos are shipped the next working day.

Compare
As low as €11,866.00
Trustpilot
Click here to see more reviews
Skip to the end of the images gallery 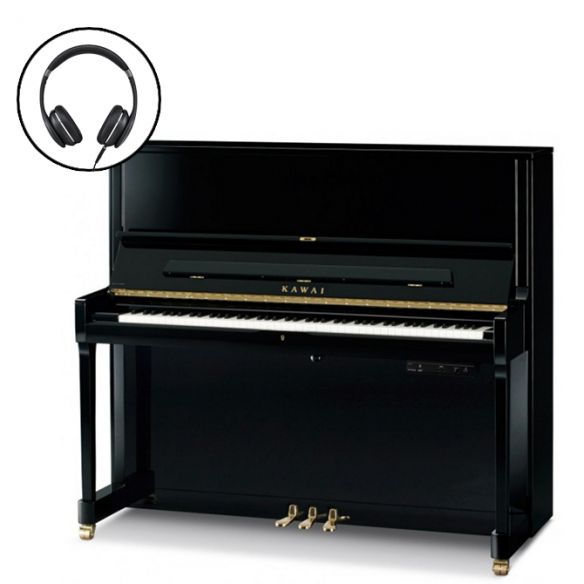 The Kawai K500 ATX4 is the silent acoustic version of the Kawai K500. A silent acoustic piano offers you a true acoustic piano experience, where with a headphone function you can continue practicing in peace, without disturbing others. Kawai AnyTimeX 4 hybrid pianos and grand pianos combine Kawai's masterful acoustic piano craftsmanship with advanced digital piano technologies. The pianist can rehearse new pieces with a wide variety of sounds, use the built-in metronome, make recordings or play along with songs via the Bluetooth audio function. Using the PianoRemote app, you can control the ATX4 system very easily via smartphone or tablet.

The AnyTimeX 4 hybrid instruments blend Kawai’s masterful acoustic piano craftsmanship with advanced digital piano technologies. Each piano begins with the solid foundation of Kawai’s award-winning upright and grand pianos, offering class-leading features such as the Millennium III action, considered to be the world’s finest upright and piano actions.
Equipped with Kawai’s most advanced digital and sound technologies, AnyTimeX 4 instruments are also premium digital pianos that can be played silently with headphones. Players can practice new pieces in silence using a variety of high quality sounds, use the built-in metronome then record their performance, or play along with tracks from a Bluetooth-connected smart device.

The Shigeru Kawai SK-EX concert grand piano was conceived as the next step in evolving the art of the piano. Earning a reputation as the ‘premier piano of Japan,’ it graces the stages of concert halls and musical institutions around the globe, receiving universal acclaim for its exceptional clarity and dynamic range.  The SK-EX has frequently been selected by professional pianists at such prestigious events as the Chopin, Tchaikovsky, and Rubinstein international piano competitions.  With its magnificent tone and wonderfully responsive touch, the SK-EX can best be described with one word – incomparable.

Supplementing the beautiful acoustic piano voices, the AnyTimeX 4 pianos digital sound engine also features an excellent selection of additional instruments, ranging from electric pianos and drawbar or church organs, to strings, human choirs, and synth pads, inviting musicians to add greater variety to their performances. Furthermore, the Dual playing mode also allows two different sounds, such as grand piano and strings, to be layered together for a richer, more luscious tone, while the Split and Four Hands modes divide the keyboard into two independent sections with separate sounds for each. The volume balances and other settings for each playing mode can also be easily adjusted using the dedicated PianoRemote app.

Designed to meet the connectivity needs of modern pianists, AnyTimeX 4 pianos feature standard USB and MIDI jacks for connecting to computers or other instruments, as well as Bluetooth MIDI and Audio technology that allows wireless communication with supported smart devices. Once paired to a phone, tablet, or laptop, AnyTimeX 4 owners can enjoy a wide variety of exciting music-related apps that enhance their studying and playing experiences, or stream high quality audio directly through the instruments’ headphones without the need for any cables.

The digital features of AnyTimeX 4 pianos are exclusively controlled via the Kawai PianoRemote app, available for both iOS and Android devices. PianoRemote provides a range of functions, including sound selection and customisation via the Virtual Technician feature, performance record and playback with integrated metronome, and a built-in piano music library consisting of hundreds of classical pieces to enjoy – all accessible from an attractive, intuitive user interface.

The AnyTimeX 4 pianos’ Spatial Headphone Sound (SHS) technology enhances the depth and realism of the instrument’s digital piano sound when listening through headphones or earphones. The player can select one of three different acoustic presets that adjust the spatial positioning of the sound, while also helping to reduce auditory fatigue when using earphones or headphones for extended periods of time. In addition to featuring a premium quality headphone amplifier, AnyTimeX 4 instruments also allow players to specify the type of headphones connected (Open, Semi-open, Closed, In-Ear, Canal, etc.) to ensure an optimal listening experience.